It is well known that one of the most important parameters in the PLD process is the amount of laser energy per unit area, or fluence, that impinges on the ablation target. The fluence strongly affects such physical properties as the removal rate of target material and the internal and kinetic energy of the ablated species.

Changes in the amount of material removed per pulse clearly will affect the deposition rate of the growing thin film. Furthermore, changes in the energetics of the ablation plume will directly affect the crystallinity of the deposited film, the intrinsic stress, and electronic or optical properties of the deposited film. Thus, accurately setting the fluence and keeping the fluence constant for the entire deposition process, and from run to run, is key to consistent material properties and film growth rates.

Moreover, energy subsequently absorbed by this ablated material may in turn ablate material off the window surface. The removal of material from the window surface in this fashion can be even more deleterious to the deposition process as it degrades the optical quality of the window, and thus the shape of the focused spot on the target.

Depending on the chamber design, background gas pressure, and the laser beam angle of incidence with respect to the ablation target, the film build-up on the window can become a significant problem. As material builds up on the surface of the laser optic, it starts to absorb a fraction of the incident laser beam energy. With more build-up, the amount of energy absorbed can become significant enough to reduce the On-Target Laser Fluence.

This photograph shows an example of film built up on a fused silica window optic obtained from one of our customers. You can clearly see where the rectangular shaped laser beam was impinging on the window.

The pulsed excimer laser beam was in fact constantly removing the film that was freshly deposited by the previous laser pulse. However, a small fraction of the fused silica material comprising the window was also being removed by the deposited film with each laser pulse. This, in turn, damaged the optic significantly by degrading its surface quality. 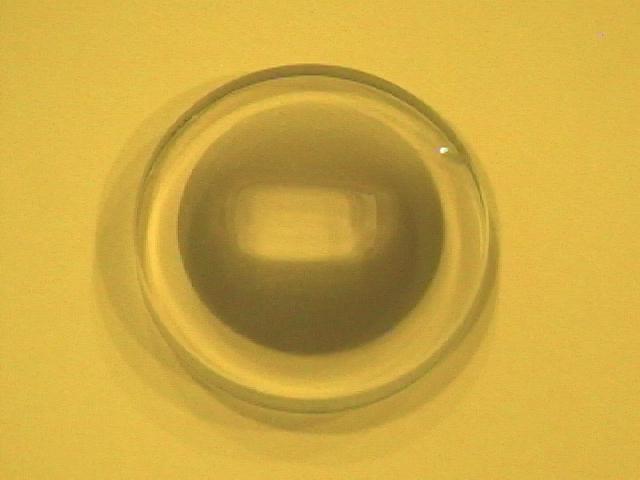 PVD Products has developed a solution to this problem that we call the Intelligent Window (IW). This product has two different but equally important features:

The Intelligent Window includes a large internal UV-grade fused-silica disc housed inside a pair of vacuum flanges. This disc is connected to a rotary feedthrough and can be easily rotated when desired. Behind the disc is a high quality, AR coated optic that makes the atmosphere/vacuum seal using a VitonTM O-ring. Ablated target material is deposited onto only a small section of the internal disc that is defined by an aperture located just in front of the disc.

The IW comes in a variety of sizes as can be seen mounted in the photographs of our PLD 3000 and PLD 5000 systems.

The longevity of the internal disc provides 20 to 50 times longer life than a standard optical window. Process gas is also bled into the Window area to keep a steady over-pressure of gas near the fused silica disc to further increase its longevity.

When a section of the silica disc has become coated or degraded, the disc can simply be rotated to expose a new, fresh optical surface. The time between rotations will strongly depend on the user chamber design as well as process parameters.

For instance, the splitter could be inserted into the beam path during preparation for the deposition run to accurately determine the energy, or fluence, which will hit the ablation target. The beam splitter can also be inserted into the beam path in the middle of a run to see if it has become necessary to rotate the internal window and thus keep the variations in laser fluence to a minimum. When the beam splitter is extracted from the beam path, a shield protects it so that it does not become coated by ablated material.

The windows can be designed and fabricated with custom flanges to mount to your existing chamber’s optical port, with or without the beam splitter/Joule meter option. The IW comes standard with a high quality optic coated for either 248 nm (KrF), or 193 nm (ArF) with alternate wavelengths available on request.

Windows can also be designed to be UHV compatible and operate well below 10-8 Torr if desired. They also include either a ¼-inch SwagelockTM or a ¼-inch Male VCRTM fitting for process gas introduction to the chamber close to the window surface.

Other options include motorized disc rotation, electro-pneumatic linear actuators, as well as software to monitor the laser beam energy, rotate the disc position, and monitor and control the excimer laser beam output energy.

A spare fused silica "sacrificial" disc is also provided. When the perimeter of the first disc is fully coated, it can be easily replaced with the spare. The first disc can then be cleaned with polishing compound.